Mobile application testing is gaining importance with constant growth in the mobile industry. As per Statista, mobile phone users have grown from 48.8 to 63.4% in the past 5 years. Mobile manufacturers are continually rolling out various devices with different specifications and operating systems at regular intervals. Given the proliferation of smartphones, several organizations and brands are developing mobile applications and releasing them in the hands of consumers.

However, the most critical challenge for the application developers is to ensure that the application works well across various devices and is compatible with all the other configurations.

Try Testing on 2000+ Devices for Free

It is essential to understand testing using Emulator vs Simulator vs Real Devices. Each approach has its benefits and limitations which one should keep in mind before finalizing any one approach.

Common Issues with testing mobile applications on Emulator or Simulator

After considering the above points, we can conclude that emulators and simulators are suitable for testing mobile apps in the initial stages of development. However, they are not reliable enough to release applications in the production stage.

Why do Developers prefer Testing on Real Devices?

Following are a few significant reasons that justify why developers prefer testing on real devices:

In order to overcome such adversities, one can opt for a Real Device Cloud.

Cross browser testing Emulator and Simulator
Was this post useful?
Yes, Thanks Not Really

Thanks a lot for your feedback!
Tags
Cross browser testing Emulator and Simulator 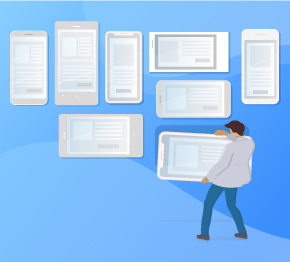 A number of terms and concepts important in the practice of visual testing. Learn how to run fast, r... Are flaky tests making your life miserable? If so, change your mindset about them. Flaky tests can t...