Test automation is essential for bug-free software and ensuring desired user experience. As technology advances, so does the complexity of test automation.

Keeping up with the latest tools and techniques can be a daunting task, especially for those who are not familiar with coding or are new to the field.

However, modern AI technology is crossing the horizon, entering the mainstream with powerful tools like ChatGPT, which can, among thousand other things, talk to you and teach you how to read and write code like a pro-human.

Also Read: Latest Automation Testing Trends to look out for in 2023.

In this article, let us go through the process of mastering test automation using BrowserStack hybrid cloud and OpenAI GPT technology.

ChatGPT is a state-of-the-art language model developed by OpenAI. By using natural language processing-based artificial intelligence, it allows for the automation of tasks that involve human-like interactions, such as an AI chatbot or virtual assistant.

OpenAI intends to use different interfaces like Playground, ChatGPT, and APIs to make its AI capabilities more accessible and user-friendly for a wide range of users and applications.

The playground interface allows users to experiment with and interact with OpenAI’s AI models visually and intuitively. This interface is designed to be easy to use and provides finer controls over model dynamics and I/O.

ChatGPT is a web application based on an AI model that allows users to interact with OpenAI’s AI naturally and conversationally. It can understand and respond to natural language input and can keep track of previous conversations to provide more accurate and relevant answers.

ChatGPT can generate text in various formats, such as structured data, code snippets, and annotations, which can be used to automate tasks such as code generation and testing.

Here are a few ways in which ChatGPT can be used to learn how to code:

Overall, it is a positive development, and the vast usage demonstrates the growing interest among users to have high-capability AI tools as part of their arsenal.

What is BrowserStack Automate?

BrowserStack Automate is a testing platform that allows users to run automated tests on a variety of devices and browsers. With a wide range of configurations and capabilities, it is a great tool for testing web and mobile applications.

One of the biggest advantages of using BrowserStack Automate is its cloud platform, which allows for easy access to a wide range of devices and browsers for testing.

This eliminates the need for a physical device lab and allows for testing on a variety of configurations, ensuring that your application works seamlessly on different devices and browsers.

Another advantage of BrowserStack is its integration with Selenium, Appium, and other popular test automation frameworks. This integration allows for the automation of web and mobile applications and provides a wide range of capabilities to test your application effectively.

How to use ChatGPT and Automate for Test Automation?

Combining the power of BrowserStack Automate and ChatGPT can bring significant enhancements to your test automation process.

Before getting started, you will need to set up an account with BrowserStack.

ChatGPT can be used in various ways when trying to learn or implement test automation for any kind of scenario, including but not limited to:

ChatGPT works in threads of conversation much like a messaging app and maintains context for future reference in the chat history.

Read More: What is Test Planning?

Example 1: Suppose you had a website bstackdemo.com on which you have built some functionality, and you want to plan the test automation.

You can use GPT in such cases by giving it the details on functional components and their use and asking it to generate a test plan.

Prompt: “Bstackdemo.com is an eCommerce website. Prepare a test plan for automation tests to carry out the following validations on the website: And just like that, you have enough template material to start a test document. You can share this with your team and start building on this basic plan.

Notice not only did It understand the task from limited information, but it also figured out an appropriate platform and automation tool to test with. Once your plan is ready you can test it on BrowserStack.

Example 2: You can use ChatGPT to reformat and prepare any data for any other format.

Let’s say you want the test plan in a format where it could be easy for you to enter it into a Bug tracking platform like Jira or Github.

You could use ChatGPT in such case by prompting further in the same thread : Example 1: You can give ChatGPT a piece of code and it will write unit tests for it in the desired format.

Not only can it recognize the language of input code without any information from our side, but it also uses a correct library called Enzyme, and goes on to explain the examples in further depth with appropriate disclaimers.

Example 2: If you are a beginner and just want to learn concepts, you can ask ChatGPT to give examples and explain how unit testing works in any popular language or framework.

Prompt: “How to write unit tests for iOS using XCtest? Explain with an example.”

ChatGPT: Responds with definitions, examples, and a detailed explanation: The power to seamlessly present concepts, code samples, and explanations for code is what makes ChatGPT a powerful tool to be deployed in various coding scenarios including test automation.

Write test automation in any framework with ChatGPT

Continuing with the test plans generated earlier, you can use ChatGPT to now write test automation code for the same.

Prompt: “Write a BrowserStack Automate script in nodeJS with Selenium to Prompt: “How to write automation test in BrowserStack using Appium? Explain with a short example.”

Prompt: “Write a puppeteer script to open browserstack.com/guide and extract the first 3 articles from the page.” Just like this, by varying the prompts appropriately, you can generate code samples for the programming language and automation framework of your choice.

These code snippets are never 100% on syntax, but enough for you to have a coarse structure that can be further worked upon and refined with the help of official guides and, again, ChatGPT.

Example 1: You can use the AI to explain to you a part of the code or the entire file; you can just copy and paste and ask it to explain it back by: Example 2: Now, if you want to change something in the code – like instead of running 3 tests, just run on one device and change test parameters, etc. You can make ChatGPT do that by prompting something like this:

Prompt: “Change the provided example code, and instead of running 3 tests in parallel, run only the first one on the iPhone and remove others. After that, change the part where it matches the title of the page and product name and remove it. In its place, after opening bstackdemo.com, just check and log the first h1 element on the page.”

It seamlessly understands sandwiched commands and outputs this code, which when we ran through diff checker against the original code we get this: This is not far from what a human developer’s git revision before code push would look like.

As you can see, it can maintain this flow of back and forth irrespective of how long the conversation is and make the right changes in the right place.

Ideally, you should start with small bits and try to put them together to get the most out of its capabilities. Feeding it large prompts could lead to difficulties while trying to control it and also a bad server-side response time.

ChatGPT can be used by developers and QA professionals to improve their routine reporting and data analysis activities in several ways, especially related to testing automation report analysis.

ChatGPT can be used to summarize the test execution results, providing an overview of the test results, including the number of tests passed, failed, and skipped. Prompt: “What could be the cause of this error in Xcode: ChatGPT as an all-purpose AI Assistant

Now, for the last section of our series of examples, let us look at the most general and powerful capability of ChatGPT, which is to behave like a real human with thoughts and opinions on various aspects of development, automation testing or whatever else you want to discuss with it.

Prompt: “We want to build a 5-page web app as a prototype for our new product series catalog, we have about 15 days to do that before the meeting and we have not decided what frameworks to use, please suggest the best frameworks/libraries for TS, CSS, DB, build, CICD and automation testing.” Prompt: “How do you foresee the Cloud test automation market evolving in the next 5 years to come?” ChatGPT has certain limitations and is constantly changing and evolving with more widespread adoption.

Here is a quick summary of its limitations:

OpenAI, the company behind ChatGPT, has been working on ways to mitigate these issues., it is essential always to verify the information generated by GPT models, especially when used for critical tasks.

Since this is a new development, the functionality provided by ChatGPT is not limited to test automation.

Think of it as a sum of all tech knowledge on the internet before 2021 made accessible through a highly functional chatbot that can process and present information from different perspectives in different contexts.

Mastering test automation with ChatGPT and BrowserStack Automate is a powerful way for any organization looking to improve the efficiency and effectiveness of their testing processes.

With ChatGPT, teams can easily plan, execute and analyze their tests, while BrowserStack Automate allows them to run those tests across a wide range of browsers and devices.

Together, these tools provide a comprehensive solution for test automation that is easy to use and provides fine control over test dynamics.

By leveraging the power of AI, teams can automate repetitive tasks and access deeper insights into their test data, making it easier to identify and diagnose issues, predict and prevent defects and improve overall quality.

While there are limitations to using GPT for test automation, with the right approach and the right use cases, it can be a powerful tool that can help teams to improve their testing process and ultimately to deliver better products. 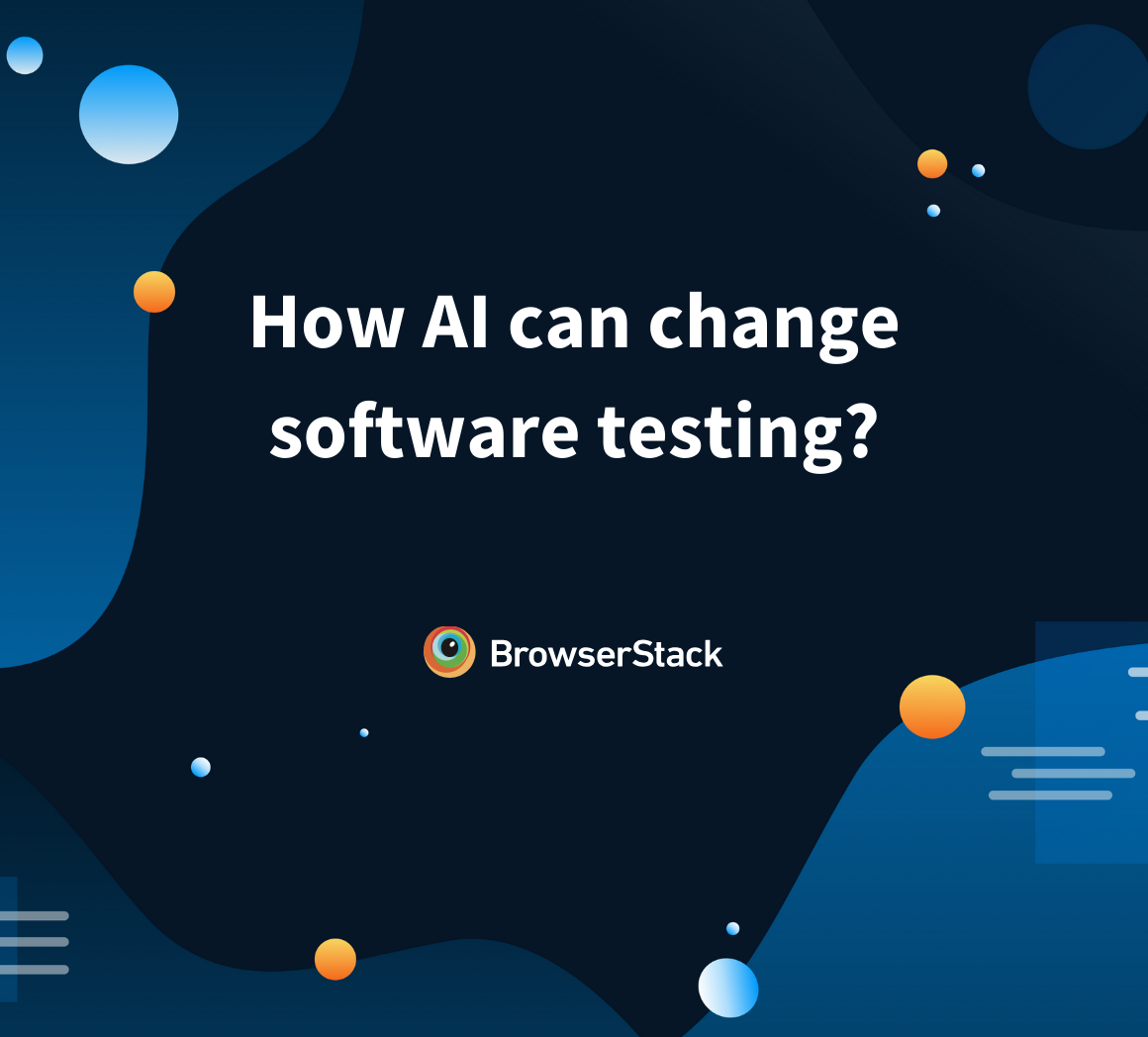 Why should you keep an eye out for AI in software testing? Learn more about how Artificial Intellige... Learn the difference between AI and ML and the three ways by which ML helps in automating tests. AI can be a game-changer in testing by applying computer vision in visual regression testing for bet...