Get Started free
Home Guide How to install GeckoDriver for Selenium Python?

How to install GeckoDriver for Selenium Python?

GeckoDriver is a web browser engine that is used by a lot of applications built by the Mozilla Corporation. It is used as a proxy by the W3C WebDriver-compatible clients to interact with Gecko browsers. GeckoDriver acts as a link between your Selenium tests and Firefox. This guide explains in detail how to install GeckoDriver for Selenium Python.

While testing web applications, it is often efficient to use automation test scripts in order to check for various requirements such as functionality and useability.  Selenium is an open-source automation framework that is highly utilized in the software testing industry to automate testing for web applications. It supports multiple popular languages such as: Python, Java, Ruby, PHP, JavaScript; and multiple popular OS such as Windows, Linux, Mac, Android, and iOS.  Additionally, Selenium also supports several established browsers such as Google Chrome, Mozilla Firefox, Safari, and Microsoft Edge.

Numerous applications developed by the Mozilla Foundation and Mozilla Corporation utilize the web browser engine Gecko. Most notably, Firefox, which is a world-renowned and highly used browser, is actually based on Gecko.

In order for Selenium to be able to communicate with the Firefox browser – a browser driver is required. GeckoDriver is aptly named, since it allows communication between Selenium and the Gecko-based Firefox browser.

Selenium WebDriver is a well-liked Selenium feature that enables cross platform testing as well as OS-level configuration and management of the browsers. The browser driver, GeckoDriver, is required to interface between WebDriver-enabled clients and the browser, Firefox, to execute the automation test scripts written in various programming languages.

To run automation scripts with Selenium on any browser, a compatible browser driver must be utilized. GeckoDriver allows the user to automate various actions on Gecko-based platforms such as Firefox.

When running a test script in Selenium, the geckodriver.exe file must be used to implement the WebDriver protocol. Compatibility is the main benefit of utilizing GeckoDriver over the built-in Firefox driver. GeckoDriver and Selenium communicate using the W3C WebDriver protocol. The universally accepted Web Driver standard is W3C. This trait of GeckoDriver is highly beneficial to developers since it makes the tests more consistent across browsers and stable.

The figure above illustrates how GeckoDriver works.

geckodriver.exe launches a local server that can be used to execute test scripts. By acting as a proxy,  interfacing with Selenium, and translating requests into Marionette automation protocol. GeckoDriver establishes communication between Selenium and the Firefox browser.

How to Download and Install GeckoDriver for Selenium Python

Step 1: GeckoDriver can be installed from this link here. Pick the version of GeckoDriver based on the system being utilized. In this tutorial, the system is 64-bit and runs on Windows OS.

Step 2: Unzip the file and obtain geckodriver.exe.  This executable file needs to be accessible when running a program with Selenium, and there are three possible methods to accomplish this task.

Method 1: The first method is to edit the Path variable using the Advanced system settings. 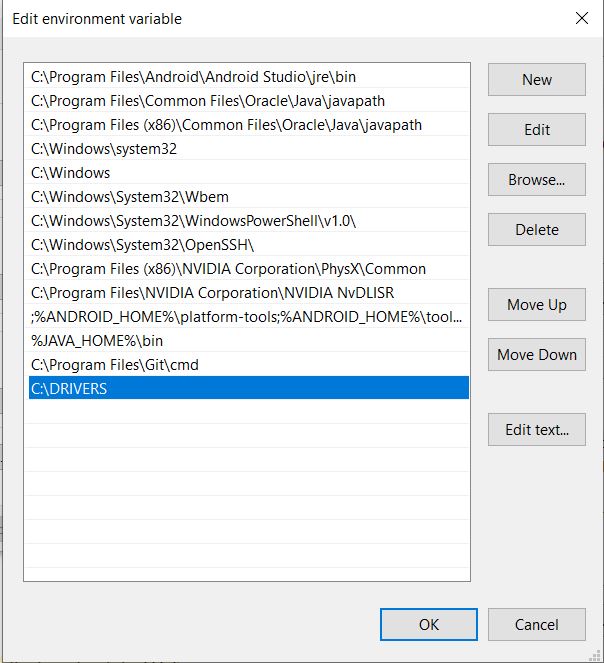 Method 2: Specify the executable path of geckodriver.exe within the test script.

Method 3: Use the web-driver manager package.

The above-mentioned methods are the easiest to utilize and work on any system, be it Windows, Linux, or macOS.

Alternatively, the following steps can also be used to download and set up GeckoDriver via the command line on any Linux/macOS system.

1. Pick the right version of GeckoDriver based on the system being utilized from the releases available. For this example, the latest version is “geckodriver-v0.32.0-linux64.tar.gz”.

2. Simply enter the following command into the terminal to install this release.

The following lines will be seen once the download is completed.

3. If you haven’t directly downloaded it into the right location, move the tar file to the appropriate folder with the following command.

The file will be moved to the software directory.

4. Now unzip the file with the following command

The geckodriver.exe file will now be available.

5. Lastly, set the PATH in the .bashrc file with the following command.

6. Install Conda on the Linux terminal, then use the following command to directly install GeckoDriver.

How to Launch the Firefox Browser Using GeckoDriver in Selenium Python

Steps to Launch the Firefox Browser

Step 1: Import the WebDriver and options module from Selenium.

Step 2: Options is a concept that was added to Selenium in order to allow the user to customize the Firefox session. In this example, it is used to provide the binary location of firefox.exe.

Step 3: Initialize the browser driver, and pass an instance of the options class in the driver initialization. If GeckoDriver hasn’t been added to the path, then execute the following command.

However, if the geckodriver.exe file location has been added to the path, then execute the following command.

Step 4: Launch the Firefox browser and navigate to a website. Alternatively, this process is made far easier if the WebDriver-manager package is utilized.

See the example code below:

Selenium
Was this post useful?
Yes, Thanks Not Really

Thanks a lot for your feedback!
Tags
Selenium How to download a file using Selenium and Python

Step-by-step tutorial on how to download a file from a website using Selenium and Python. Code snipp... Learn how to automate UI testing using Python and Selenium. This tutorial will show you how to write... How to install Selenium Python on macOS?

Learn through this step-by-step automation tutorial on installing and implementing Selenium with Pyt...

How to download a file using Selenium and Python