Get Started free
Home Guide What is Sanity Testing with examples

In today’s era, for a Business to run successfully, there is a need to develop software that delivers a good end-user experience. Therefore, before the software is released in the market, it needs to be tested efficiently. While there are numerous phases to creating great software, testing is still the most important step before it is released.  Software Development Lifecycle (SDLC) consists of a number of testing types, each testing type having a different purpose.

What is Sanity Testing?

Sanity Testing or Surface Level testing is a type of testing which is performed on the stable build of the software. It is a quick and basic test (or set of tests) to ensure that the code changes made are working properly without any bugs. It is a subset of Regression testing and is usually executed after the software product has passed the Smoke test. 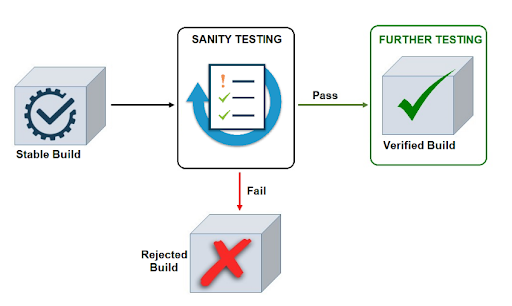 Some features of Sanity testing include,

The main objectives of Sanity testing are:

What is the process of Sanity Testing?

The Sanity testing process has the following steps:

In this step, newly added features and components are detected. Also, the modification presented in the code is detected while bug fixing.

These newly implemented components and attributes are analyzed and modified to check whether they work as intended as per the given requirements.

A smaller section of the newly linked components is tested deeply. The test will fail if these newly introduced components do not fulfill their requirements. If it meets the need, the Sanity test is passed. Next, System testing is performed thoroughly to ensure that these functionalities do not interfere with the previously installed system and application components. When should Sanity Testing be conducted?

Sanity Test should be performed in the following cases:

Consider you developing an online Food ordering app, and you want to offer a 10% discount on New Year (1st January) for your members having an elite membership.

Sanity testing will verify the following:

Sanity testing does not verify other areas of the app, like delivery tracking or restaurant reviews. That is done by Smoke testing and Regression testing, which happen before and after Sanity testing.

Some of the benefits of Sanity Testing are:

Some of the limitations of Sanity Testing are:

Sanity testing focuses on determining whether more testing is necessary for a software application. It is crucial because it saves a lot of time and effort when any issue in the system is discovered. Sanity tests also give a quick update on the progress of the release so that the next set of actions can be planned accordingly.

However, it is important to test on real devices and browsers, taking real user conditions into account for more accurate test results. This will help in identifying how the app function in real-world conditions, especially in finding bugs. BrowserStack Live helps in performing a quick Sanity test for web apps on 3000+ real device-browser combinations. While BrowserStack App Live allows you to perform Sanity testing on mobile apps across real devices on iOS and Android platforms.