Software Testing is the critical phase of the SDLC process where early testing saves a lot of cost and effort. A low-quality software can lower customer retention by impacting user engagement negatively. It is hence essential to build software that is bug-free to increase sales, making the product much more popular. There are different types of testing such as Smoke, Sanity, Integration, Regression, Unit Testing, and API Testing. Regression Testing is one of the important parts of Testing, especially when new features or updates are added to an existing application.

Regression Testing is the type of software testing process to ensure that the code change has adversely affected existing features. All or part of impacted features is tested as part of the regression testing process. Any issues which come into existence due to the latest code changes should be caught in this type of testing.

Role of Automation in Regression Testing

Unlike Sanity and Smoke, the scope of regression testing is vast, since the QA has to test the entire application or subset of features in regression testing. Considering that Manual Testing for Regression involves a lot of time and effort, also it is not cost-effective. This is the reason, why most organizations are opting for automated regression testing. Regression Testing in Agile Teams often works in Risk-based approach, opting for test automation frameworks for a streamlined test process.

Function Regression Testing is the type of testing where workflow or use-cases will be tested using manual or automation tools. It involves entering some values by fetching selectors from browser DOM. This also includes validating text-based values by getting them either programmatically or manually. Most of the modern testing in practice is based on this approach.

Visual tests generate, analyze, and compare browser snapshots to detect if any pixels have changed. These pixel differences are called visual diffs (sometimes called perceptual diffs, pdiffs, CSS diffs, UI diffs). You can set the threshold values, which give you the flexibility to compare images with small differences or ignore small differences.

Cypress is a popular test automation framework, it allows a lot of extensibility. Visual Regression Testing is one of the Extensible features of Cypress. There are a lot of plugins available in Cypress that can be used to capture visual images and compare them. This tutorial, explains Cypress Visual Testing using Cypress Image Diff plugin.

To set up Cypress Visual Regression environment, you need to install the pre-requisites listed below.

Navigate your project Root folder (the directory where package.json is located). Enter the below command

Navigate to cypress/plugin/index.js and enter the commands written below

Navigate to cypress/support/commands.js and enter the code written below

Navigate to cypress/support/index.js and enter the code written below

The above code, navigates to the Google Home page and compares if it is visually fine.

Note: When you first time run this script, it takes the base image and subsequent runs are compared with that base image.

Run your Cypress Visual Test using the below command.

Note: First Time when you run the test, it will be passed automatically as both base, and comparison images are fresh, and you might not see any difference.

One of the key features of this plugin is that it generates the good HTML report. Once you run the test, two folders will be created i.e.: 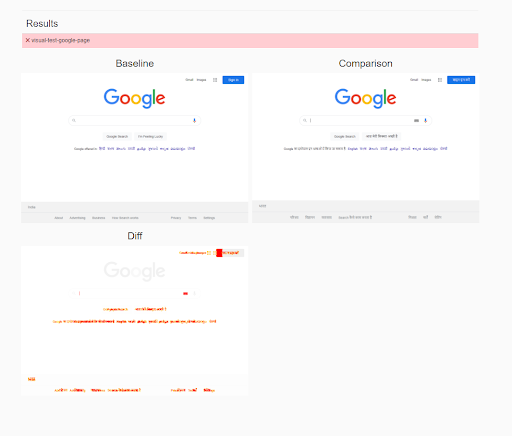 How to perform Cypress Visual Testing of an element

Cypress can be used to perform visual tests on a specific element, where it compares the before and after screenshots of the specified elements as seen in the example below.

This code snippet takes a snapshot of element #report-header and compares visually if it is same or not.

By default, the value of the threshold will be zero, which means it should match exactly with the base image. However, you can make it flexible by applying other threshold values.

Check out other useful functions of cypress-image-diff plugin

Step 4: Configure cypress.json file to include the .js files.

Use the below command to execute Cypress Visual Test in Browserstack

Step 2: To import Percy to Cypress, navigate to cypress/support/index.js File and enter the following command

This example does a visual comparison of the Google.com Page using Percy and Cypress

Go to http://percy.io create a sample project. Once you create a Sample Project Percy will generate API key as seen below. Copy the Percy Token from here. Enter the Percy Token using the following command for MacOS

For powershell use below command to enter Percy Token A step-by-step tutorial on setting up and running Cypress tests from scratch. Also, learn how to per...