To celebrate the relentless passion of testers, BrowserStack is honoring some of the icons in the testing space—those who push the industry forward by sharing their knowledge with the community at large through their thought leadership.

Callum Akehurst-Ryan is a seasoned Test Engineer with over 15 years of experience focussing on full stack exploratory testing, team collaboration, and non-functional testing. He is an avid speaker at many testing conferences and inspires conversations around diversity in testing.

Tell us a little bit about your role as a Senior QA Tester at Improbable.

I’m embedded into teams as an exploratory tester, working with developers and designers to uncover information about the quality of what we’re building. Rather than using the same methods all the time, I work with the team to think of the best approaches and tools to solve testing problems. I also work to socialize new ideas and champion quality within teams and the wider organization through training and workshops.

What are some passion projects you're currently working on?

I’ve not been working as much on testing projects this month as I’ve been focused on rehearsals for a musical and introducing some people to playing Dungeons and Dragons (something that I’m so passionate about that I’ve spoken and blogged about it before). However, I’ve recently been interested in how testers communicate in teams and how we can learn to push messages up; rather than wait until we’ve been asked for them.

What are you reading/learning right now? What made you interested in this?

I’m learning about security testing and threat modeling at the moment. It’s an area that I’ve been interested in for some time, and I’m currently working with some awesome testers and people in security that I can learn from. I’m also excited that I’ll be at TestBash UK this month and will get to see loads of amazing talks and learn loads of new things; it was a TestBash talk that got me interested in security and modeling bias testing in the first place.

You delivered an interesting talk on 'Diversity of Thought In Testing'—what does it mean, and how can organizations achieve it?

In software development and testing, there’s a risk that we all start to think the same way and not question anything, that lack of questioning leads to better solutions not being explored and the risk of poor quality. Diversity of thought means being able to bring yourself into conversations with the safety of exploring different ideas rather than just accepting what everyone else is saying.

Organizations can embrace and support diversity in their teams by smashing the monoculture, creating and supporting diversity at work, opening job adverts to make everyone want to apply, and running diversity training to promote empathy in our teams.

What's your favourite software testing quote of all time?

"Something amazing happens when an explorer shares what they’ve discovered during an exploratory testing session." - Simon Tomes

What are the things you wish you knew about software testing when you started your career?

I wish I’d known how much more there was to testing than just functional acceptance testing. I wish that I’d known to start using tools like the dev tools of a browser to get under the skin of products and test closer to the code. I also wish that I’d known that one of the biggest skills I’d need in testing was the ability to develop my own scope and push information up to a team rather than wait to be told things.

What is your top advice for those entering the QA space?

Be prepared to learn! Testing is a career where things are constantly changing, so there’s so much to learn and understand. Go and get involved by joining local meet-ups, attending conferences, and reading blogs (or following testing people on Twitter) to show that you have an interest and a passion for the craft of testing. And don’t be scared that you’re not technical enough because you’ve got this; there are loads of people out there teaching things in different ways, just find the person that’s teaching in a way that works for you.

What's a fun fact about you that most people don't know?

I think that most people out there by now know about my D&D Dungeon mastering, Ramone the Testing Otter, and my tattoos. What they might not know is that I was in a TV advert as a child (I was advertising children's toys with my mom).

(Responses have been edited for clarity).

In this edition of the spotlight, we have Trisha who is a Senior Software Engineer at DRACOON GmbH, Germany. She’s also a Board Member of Association for Software Testing. Let’s get to know a little bit about her. 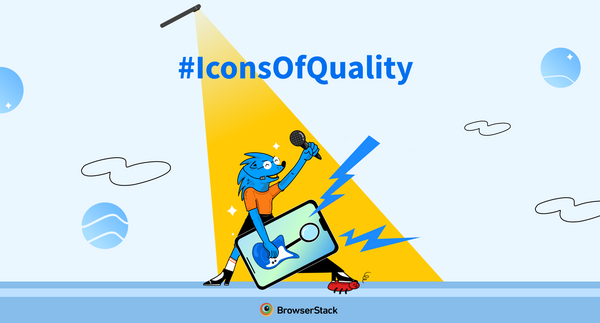 To celebrate the relentless passion of testers, BrowserStack is honoring some of the icons in the testing space—those who push the industry forward by sharing their knowledge with the community at large through their thought leadership.