Changes to a large, well-integrated piece of code can often be tricky. A new feature or some bug fix or enhancement may well disrupt the functionality of the current codebase and lead to unforeseen issues. Having a strong suite of unit tests can often help mitigate some of these problems, but the software testing community still hasn’t found a viable alternative to full-scale regression tests for ensuring a foolproof code release.

What is Regression Testing and Why is it important?

Regression testing is a type of testing that is incorporated into the software development cycle after every change to the codebase to ensure that there are no unintended breaks in the functionality.

Its primary function is to safeguard against an age-old problem of new bugs being introduced when an old one is fixed, or a new feature is implemented. Even with a strict version control system in place and thorough unit testing implemented it is next to impossible to understand the domino effect a change between project component relationships can have on the codebase when any change is made to an individual unit of a tightly coupled group of modules.

With agile practices being increasingly adopted for software development, there is a general trend to set up an iterative process of pushing code at the risk of breaking existing functionality if necessary.

And regression testing is vital in ensuring that the build does not proceed with broken functionality still in place.

Also Read: How to run Regression Testing in Agile Teams

An example can be considered of a company working on a new product for video editing software. With the main requirement being to have an MVP with only the core features, a regression test is conducted with, say, 1000 test cases to ensure that the basic functionality is watertight.

If, after this release, the software is found to gain favor with the customer base and gains such rapid traction that the management decides to add some premium features. Before the subsequent release, it would be necessary to add more test cases to the pre-existing test suite to verify the functionality after the inclusion of the new feature set.

This can be represented by the following diagram. Before delving into the ROI optimization of automated regression testing, it is important to understand the advantages of the same.

How to calculate the ROI for Automating Regression Tests

Software testing is by no means cheap. Most estimates place the cost of testing software anywhere between 15% to 25% of the total project costs. In fact, a 2019 study by industry leaders has estimated the average testing cost to be 23% of an organization’s total IT budget.

These estimates underline the importance of trying to reduce costs through automation, as well as trying to optimize the Return on Investment (ROI) from automating regression test cases.

The most straightforward method of calculating test automation ROI is the formula given below :

Savings can be defined as the amount of savings generated by replacing manual tests with automated tests. And, Investments can be estimated to be the costs channeled into setting up test automation pipelines for the regression testing to take place.

To further quantify things, Savings can be considered as

And, Investment can be represented as,

A deeper dive into these measures are thus required to understand better how to make test cases more cost-effective.

In such a case, we can consider that there is a standard Investment required for automating a test suite of a certain size as –

Thus, the Investment would vary as per project needs and is unlikely to be optimized after a certain point.

Thus savings should be optimized by increasing them as much as possible.

Again, in analyzing Savings, the main area of action should be the difference between the time to run a single manual test and the time to run the same test in automation since the other two factors are reliant on the project particulars.

And since there is again going to be a standard time taken to execute a test manually, it is important to reduce the time to run the same test in automation.

This, in essence, is the cornerstone of cost-effective automation.

How to make Automation of Regression Test Cases Cost Effective

Automation of Regression Tests can be leveraged to save costs of testing by using the following methods.

A simple example can help explain how parallel testing can boost automation test capabilities. Assuming an automated functional test of a signup form takes an average of 2 mins for 45 different Browser/OS configurations, then the total run time is 90 mins or 1.5 hrs when run successfully in sequence. If three tests are run in parallel, this can be reduced to 30 mins.

And for six tests running in parallel, the run time would be just 15 mins.

Visual testing, or UI testing, helps to verify that the UI is rendered appropriately for all users. Visual tests

Previously, this used to be the sole purview of manual testers and was deemed a time and cost-intensive process. However, with the advent of CI/CD, this has been incorporated into the testing pipeline, and test runners have been created to write and run tests. Each test carries assertions defining a condition that will either pass or fail.

Once tests are written, use a tool like Selenium or Cypress to interact with the browser. They support visual tests and allow for the generation of screenshots of web pages.

Finally, there must be a tool for managing the testing process. Percy by BrowserStack is one of the best-known tools for automating visual testing. It captures screenshots, compares them against the baseline images, and highlights visual changes. With increased visual coverage, teams can deploy code changes with confidence with every commit.

Also Read: How to Create Test Cases for Automated tests?

Automated regression tests can not only help drastically reduce test execution times by providing a reliable method to maintain test coverage and free up test engineers for higher cognitive value tasks, but they can also be made cost-effective by leveraging the power of parallel testing and automated visual tests to reduce test automation times and increase ROI Savings drastically.

With automated regression testing on BrowserStack, access infrastructure of 3000+ real devices and browsers on the cloud, capable of executing tests and delivering feedback in time, every time. When running tests on BrowserStack, tests fail only when they find an error in the application or test script and never from unavailable browsers or devices. No more false positives. Use parallel testing to get test feedback in minutes. Distribute regression tests across hundreds of parallels and run them all at once.

Thanks a lot for your feedback!
Tags
Automated UI Testing Automation Testing DevOps 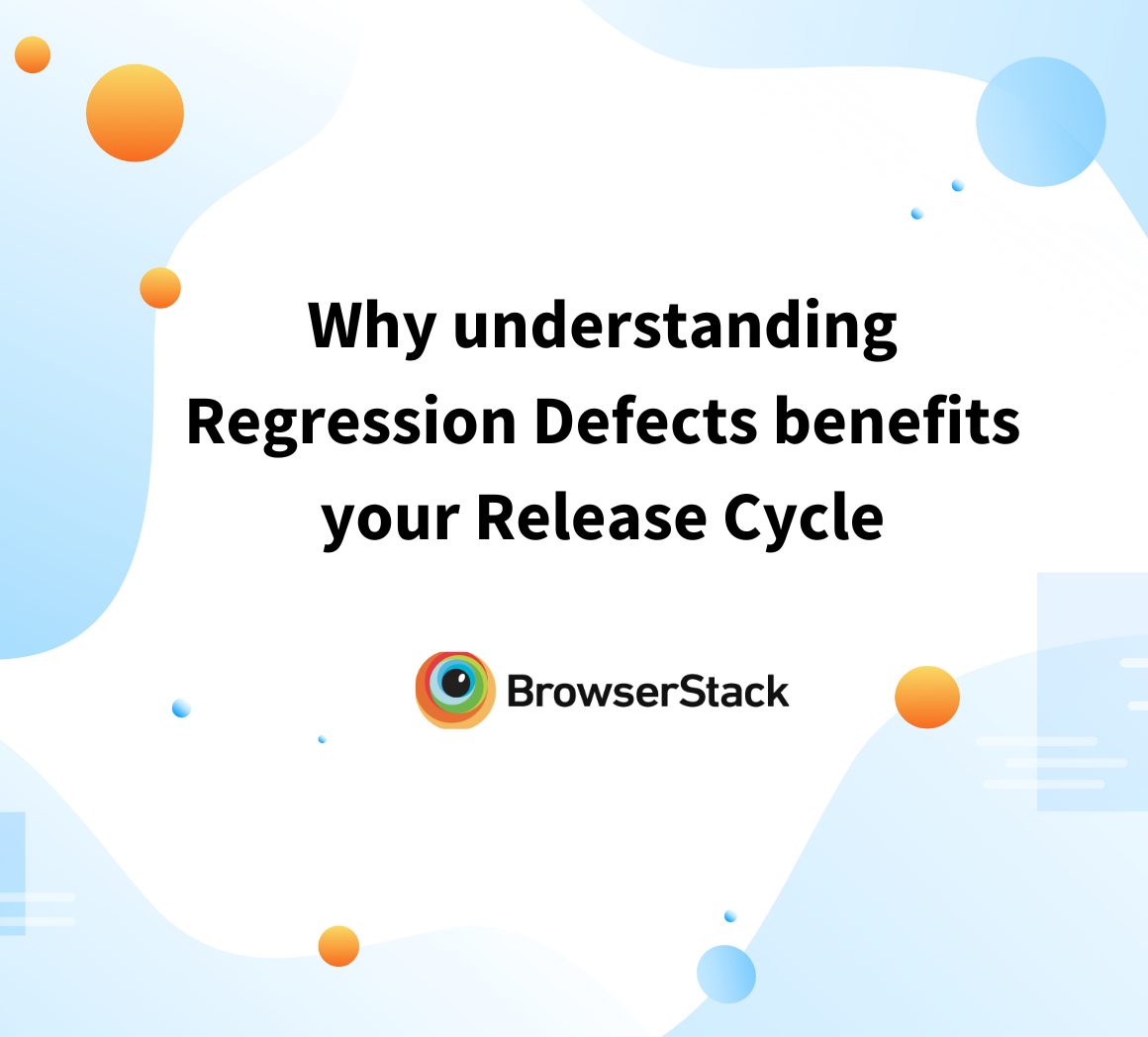