Tell us a little about your current role(s).

Being the Director and Lead QA at Rubber Duck Consulting provides me with lots of opportunities to get exposure to new things and expand on my skills. No two roles (so far) have been the same, which at times has been a little unsettling, but it has also given me the push I needed. Previously when I was a permanent employee working for somebody else, I tended to work on much the same things, same languages, tools etc, and there was a kind of safety net which sometimes might have stopped me from pushing myself. Whilst this is good, for me, I found it was sometimes a little too easy to go on autopilot and not push myself to learn new things or even look for new opportunities to progress in my career.

I currently work as a Platform Test Lead, where I am involved in providing the tooling, guidance and consultancy to help hundreds of testers spread across different centres across the UK. The role is challenging, and no two days are the same. Some days I will be using Scala or NodeJs to enhance a tool or template used by teams, other days I might be using Groovy to enhance a test job builder to help teams implement their test jobs in Jenkins, or I might be asked by a tester within a team to help unblock them. When teams reach out for help it can be quite challenging as it could be absolutely anything test related; accessibility, UI testing, API testing, security, performance, configuring a test job in Jenkins, setting up and using BrowserStack etc.

What's your goal for the coming year?

If I had to pick some goals, it would probably be to speak at one meetup and one conference and write a few blog posts, perhaps. I mainly keep to these simple goals each year, and anything else is a bonus. I used to make lots of goals upfront but felt that it started to add lots of pressure on me. In previous years in trying to reach all the goals I set out, I burnt out a little, which wasn’t good.

How do you stay up to date with your skills and industry knowledge?

Previously I would attend lots of in-person events, but in the past few years, I have tried to attend many online events; meetup.com, BrowserStack online events, AppliTools and Ministry of Testing.

I visit the MoT (Ministry of Testing) Club quite regularly, which is a forum where people ask and share things. MoT also run lots of events where they have challenges for people to complete. This is a great opportunity to expose yourself to a new tool or way of thinking and approaching a problem as so I try to do as many of these as I can.

How did you get into public speaking? What advice would you give to trying to get on stage?

To be honest, public speaking was never something I had thought about wanting to do. Just the idea of it was quite terrifying! Before getting into public speaking, I went through a phase of panic attacks. I’m unsure why it started happening, but it continued for around two years. I remember being at work, and I’d be in stand-up and terrified to give an update, totally missing other people's updates as I stressed about giving my update. Sometimes I’d attend work events and have to get up and leave for fear of fainting; it was horrible.

To try and learn new things as well as combat panic attacks, I started to run a small monthly software meetup. I wouldn’t speak much and gave a very brief hello and welcome at the beginning, but that was about it, and it didn’t help me with the issue of my panic attacks. As a side project, I had been creating a simple visual testing framework which I enjoyed building. One evening I decided that perhaps I should chuck myself into the deep end. I wrote a rough talk title and abstract around this side project and pretty much submitted it everywhere I could. I also used Twitter accounts (like AppCfp) to help me find open calls for speakers and a few other accounts I follow.

Over the next few months, I had a lot of rejections but continued to submit the same talk. In 2017, I was struggling to find a speaker for the meetup that I organised, so I decided to test the talk out to a handful of people. Giving the talk was a bit easier because I knew a lot of the attendees. Following this, two local conferences accepted my talk. The conferences were free to attend, so I didn’t feel so bad about wasting people’s time. I remember feeling very nervous leading up to these two events but practised my slides and timing. During both events, roughly 40 people attended my talks. It might not seem like many people, but I was very nervous (luckily, I didn’t faint). Following the sessions, I didn’t feel cured of my panic attacks nor satisfied with how the talks went. I felt like I’d rushed the talks, and many questions were asked that I couldn’t answer - I felt like an imposter.

Leading into 2018, I had forgotten all of the other events I had submitted to and just continued to run the monthly meetup. Slowly throughout the year, I started to receive lots of accepted emails. In May 2018, I gave my first conference talk outside of the UK to over 600 people. I don’t remember much leading up to or during the talk, to be honest, as it was a bit of a blur, but I know that I still felt very nervous and like an imposter. I had worked more on my delivery and timing, so I felt a little more confident than I did previously. During the event, people asked questions that I didn’t know the answer to, but that was OK. When a question was asked that I didn’t know the answer I simply told them I didn’t know the answer but invited the question asker and those who were interested or maybe knew the answers to hang around after the session. Following the talk, it was such a great relief to have given the talk and since that point, my fear of public speaking and having panic attacks just vanished.

If I could give any advice about public speaking, it would be that it’s ok not to be accepted when you first start submitting talks. Keep trying, there are lots of events out there and the more you submit to and speak at, the more you learn and the easier it will be. Everybody has to start somewhere. The Ministry of Testing recently published some great articles you can read on how to write abstracts.

It’s ok to be nervous before and during a talk and to not know everything. People in the audience are willing for you to succeed; they aren’t waiting for you to fail. Whilst you might feel nervous on the stage, the audience can’t see how you feel. Just be confident in what you’re presenting, and you’ll be fine. I still often feel like an imposter, and that’s ok.

Questions are also great to help you validate your ideas and help to feed into your talk. When I look at the slides from the early days compared to the last time I gave a talk, they have changed so much. I used the questions and feedback to add and remove things from my talk. The more people asked about something, the more I thought about how I could address that and show that within my talk.

What do you like about the BrowserStack Champions community?

Despite its name, being a BrowserStack champion isn’t a group of people who just use BrowserStack and just promote BrowserStack products. It’s a fantastic, diverse mix of people with so many different skills, knowledge and backgrounds which gives its champions a brilliant opportunity to not only share with each other but to learn from some amazing people in the testing community.

How is BrowserStack helping you in your work?

BrowserStack enables me to help others easily. Whilst I don’t directly use it in my current role, I support many users who need to use it. Typically I’ll need to assist teams in setting up and testing locally to use Automate as well as Live features. The documentation makes my life much easier in supporting them and quickly getting them up and running. 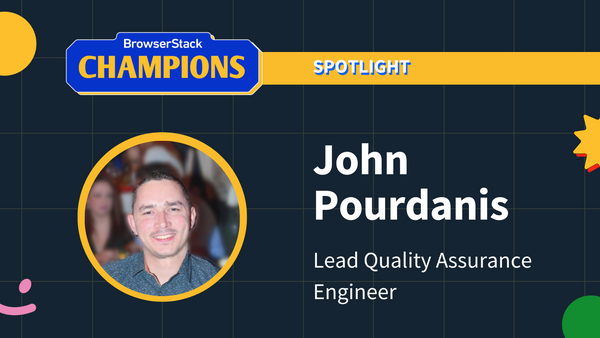 In this edition of the spotlight, we have John Pourdanis, who is a Lead Quality Assurance Engineer at VMware. Let’s get to know a little bit about them. 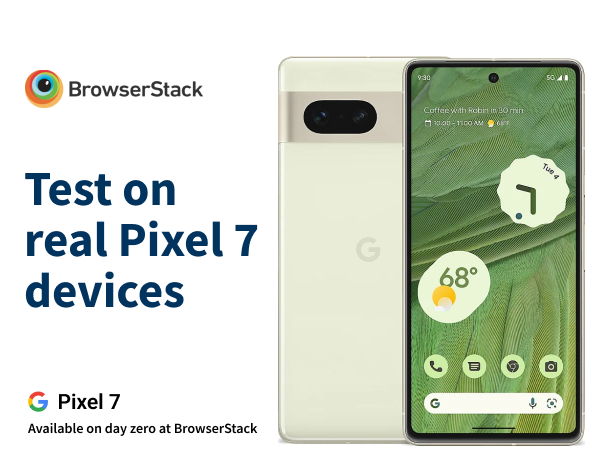