Get Started free
Home Guide Differences between VueJS and AngularJS

Differences between VueJS and AngularJS

Building for world wide web is a different kind of challenge when compared to Android or iOS app development. There are many reasons for that, one of the most crucial being the fact that web is a decentralized platform that has no single source of truth for the best programming methodology.

As a result, the market for web frameworks especially JavaScript frameworks is a hot and highly contested one. If you are building for the web you must have experienced multiple choices including frameworks like VueJS and Angular.

What framework is best for you? Which one is the faster? Which is the easiest to learn? Continue reading to get answers. Top 5 among most used web frameworks are JS based

When exploring the market for JavaScript frameworks it is important to understand that there is no best framework, there is only the best framework for your use case. Because all frameworks are different and have their own pros and cons.

Without going into too much detail, we can sum up the history of JavaScript frameworks in a few steps:

React, Angular and Vue are currently the most used Js frameworks in the world. Although they are not similar completely, they share some common features.

There are different reasons for using JavaScript frameworks in different scenarios some of the common ones are:

The most important factor while choosing a JS framework should be the use case as different frameworks are better suited for different purposes.

Between Angular and VueJS there are some very clear distinctions and some overlapping concepts as VueJS was initially built by someone who was inspired by initial versions of angular JS.

If you don’t already know, AngularJS <V2 and Angular V2< are products in the same lineup but very different structurally. For this comparison, we will be considering Angular and not AngularJs.

To understand why and how Vue and Angular are different from each other, we first need to understand what they are trying to achieve and how they use different methods to approach the problem.

Common Goals of Angular and Vue

Web development as we mentioned earlier is a field in which there are multiple ways to do one thing. How you go about implementing is something that is decided depending on your level of expertise and the use case for the application you’re building.

There are some common challenges however that are faced by most people building websites that go beyond a certain size or scale of operation. The most important ones are:

Both platforms provide a powerful command line tool/interface (CLI) to easily onboard various features packaged within the core bundle. They both run on top of NodeJS so make sure you have the latest version of nodeJS installed on your computer.

You can install the latest NodeJS from the official site. After which you can simply download CLI packages for either frameworks using npm commands.

Once you have the CLI setup, you can use it to initialize a broilerplate web app using:

After creating a base project, here are the file structures and differentiate between these 2 further: In Angular’s case you can see slightly more files, but overarching similarity in the way configurations, components and assets are organized between both.

Angular file extensions are Typescript based as it only allows to work in TS. Any additional JS injections have to be managed separately. It also creates configuration files for environments by default.

Vue uses .vue templates that are compiled into HTML and injected into main file.

Read More: How to test Vue components with Cypress? You can see from the dependency list that VueJS is much more compact and closer to the standard web when compared to Angular. Angular is opinionated, meaning that it has specific ways of doing things which may not be as flexible as Vue.js.

Read More: How to perform End to End Testing in Angular

platformBrowseDynamic is the API that supports JIT compilation and execution.

Standard HTML syntax with <app-root> tag being used to inject compiled component HTML. This selector can be configured in the component TS file.

This file is used to define data-binding variables and functions for a component.

This file is used as the HTML template for the component, Read more about templating with Angular. This is the main template which is included in the index.html, it imports the HelloWorld.vue template inside below an image.

This is the component HTML template. The export statement enables it to be imported into the main template.

This is the HTML file into which all compiled components are injected. Vue recommends using Vitest for unit testing but you can also use Jest and Peeky.

Angular Unit Testing by default run on a Karma server which you can initialize for your project using the ‘ng test’ command. You can also use other test frameworks for unit testing Angular.

To test website components in browser, you can use developer tools built in to the browser. Developer tools can help you with a number of different kinds of tests like:

For responsiveness testing, you can use the mobile viewer but for more realistic testing you need to test on real devices with network conditions and location restrictions.

BrowserStack live provides you with access to 3000+ device browser combinations with advanced features like IP location, network throttling and screen readers etc. You can use it to test your VueJS or Angular applications on real devices. If you are building progressive web applications (PWA) you can test them on Live. if you’re working on Cross-platform apps use App live and App Automate platforms for testing.

There is no clearly established metric on how much one is faster than the other but one way of thinking about it which helps understand both of them deeper is to look at when and why each one performs best.

Right out the box with the initial app as demonstrated in previous section, VueJS is lighter and more flexible offering fast and adaptive implementation for a bunch of web app scenarios including:

Angular on the other hand cannot be simply embedded into static HTML pages, but still offers ways to implement server-side rendering and pre-rendering.

What you get with Angular, something that is missing in VueJS, is an expert implementation in build, render and DOM management under the hood. Vue is less optimized and more flexible to being integrated with the build system of your choice.

It might not seem like a big advantage at first but with a scaling application the ability to add in-depth configurations at all stages for performance and security considerations is a big win. If managed properly, can lead to a pretty stable scaling experience.

If you want clear numbers then you can check out this page which lists some benchmarks for a list of frameworks including Vue and Angular. No matter which framework you choose for web development, depending on the project requirements, testing the website thoroughly under real user conditions is a must, for a seamless end-user experience.

Whether you build your website using Angular, or Vue, it should be thoroughly tested for cross browser compatibility and mobile compatibility on a range of mobile and desktop devices and browsers. To test on different devices, it is not favorable to buy devices, and maintaining an in-house device lab would take a lot of time. In such cases, real device cloud like BrowserStack can come to the rescue. For Manual Testing, BrowserStack Live, helps you debug your website in real-time through DevTools.

Thanks a lot for your feedback!
Tags
Automation Frameworks Website Testing ReactJS and Vue JS are popular web development frameworks. This guide on React vs Vue compares and h... 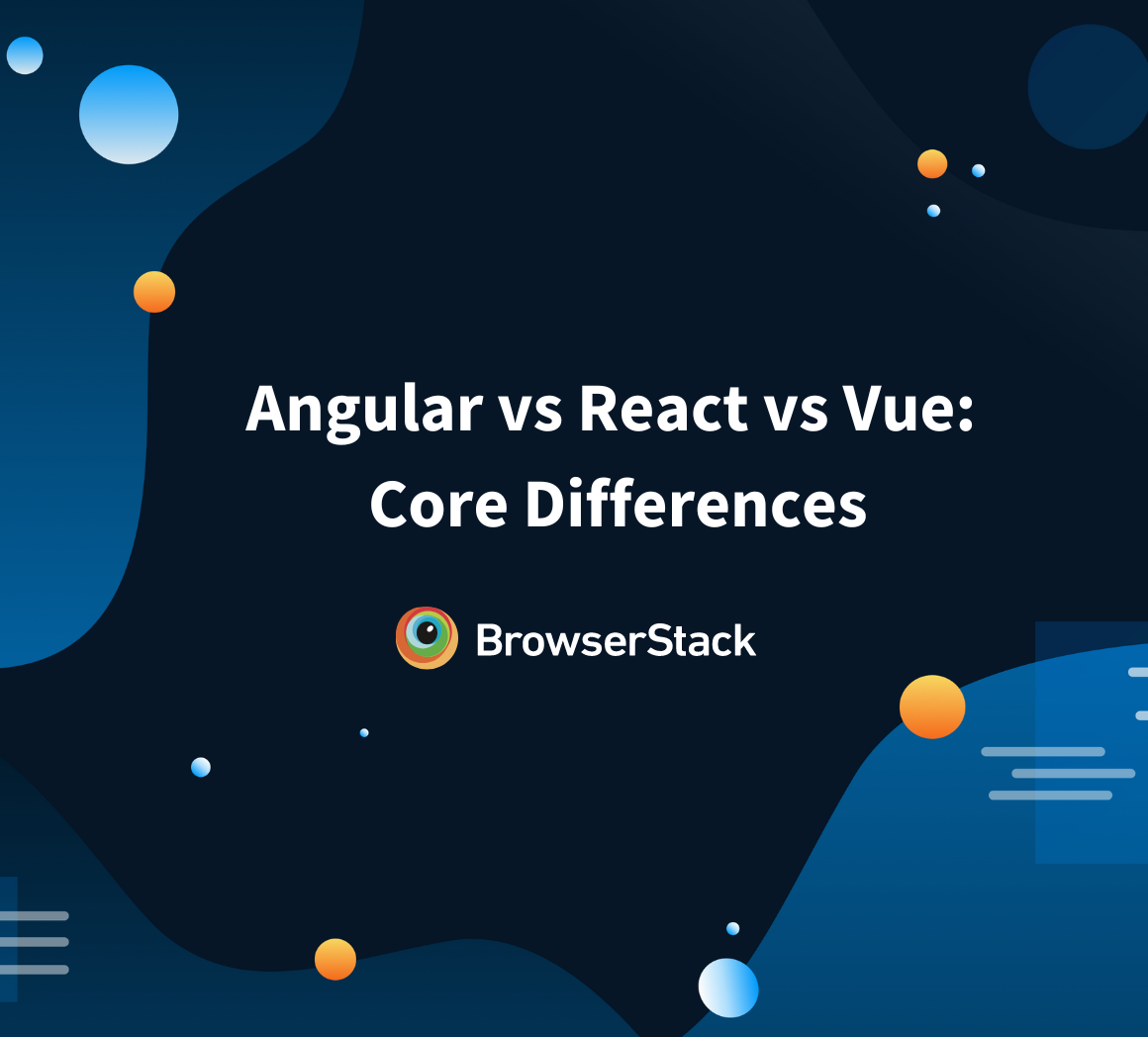 Picking the best web framework is crucial. This guide on Angular vs React vs Vue compares and help y...