Join Todd Eaton of The Weather Company to learn about how to deliver a bug-free UX for global audience. Register Now

Selenium has been the most preferred tool suite when it comes to automated cross-browser testing of web applications. Simon Stewart (creator of WebDriver and core contributor to Selenium projects) had publicly introduced Selenium 4 in 2018. Since then, Selenium 4 has been gaining immense traction for its new makeover in terms of features and functionalities.

Although there are no announcements made for the stable release of Selenium 4, one can get started by downloading the beta version of Selenium 4 available on the official website. At a high level, the Selenium 4 tools suite comes with enhanced Selenium Grid architecture, W3C standardized protocol, revamped IDE, new APIs, relative locators, and a few others.

This article explores these major revamps in detail and also describes how these upgrades will benefit test engineers.

Let’s begin with the Selenium WebDriver.

A significant change under the hood for WebDriver is the complete W3C compliance of the WebDriver APIs. This standardization will eliminate the need for encoding and decoding the API requests by the JSON wire protocol in Selenium 3 and earlier versions for communication between browsers and test scripts. This means the WebDriver will now interact directly with the target browser.

This standardization will result in more stable cross browser tests. However, the change in protocol won’t impact existing users as popular browser drivers like ChromeDriver and GeckoDriver have completely adopted W3C protocols. In a nutshell, JSON wire protocol is deprecated in Selenium 4.

Keynote from Selenium Documentation: The native support for Opera and Phantom JS has been terminated in Selenium 4 as their WebDriver implementations are no longer active. For optimizations on Opera, QAs can rely on Chrome testing as Opera too is based on Chromium. For PhantomJS, users should use Chrome or Firefox in headless mode.

The W3C Standardization for the WebDriver API is a major architectural update in Selenium 4. This will make cross browser testing more reliable and efficient.

In case, one is interested to see live demo on Selenium 4 Features by David Burns.

David Burns, a core contributor to Selenium, talks about Selenium 4, how this would impact your tests, and about the brilliant new features that you can start using straight away. David will show how you can access a site protected by basic authentication, identify a DOM mutation, get JS errors or console messages as they happen, use new Print and Window APIs to help with your testing, and more. 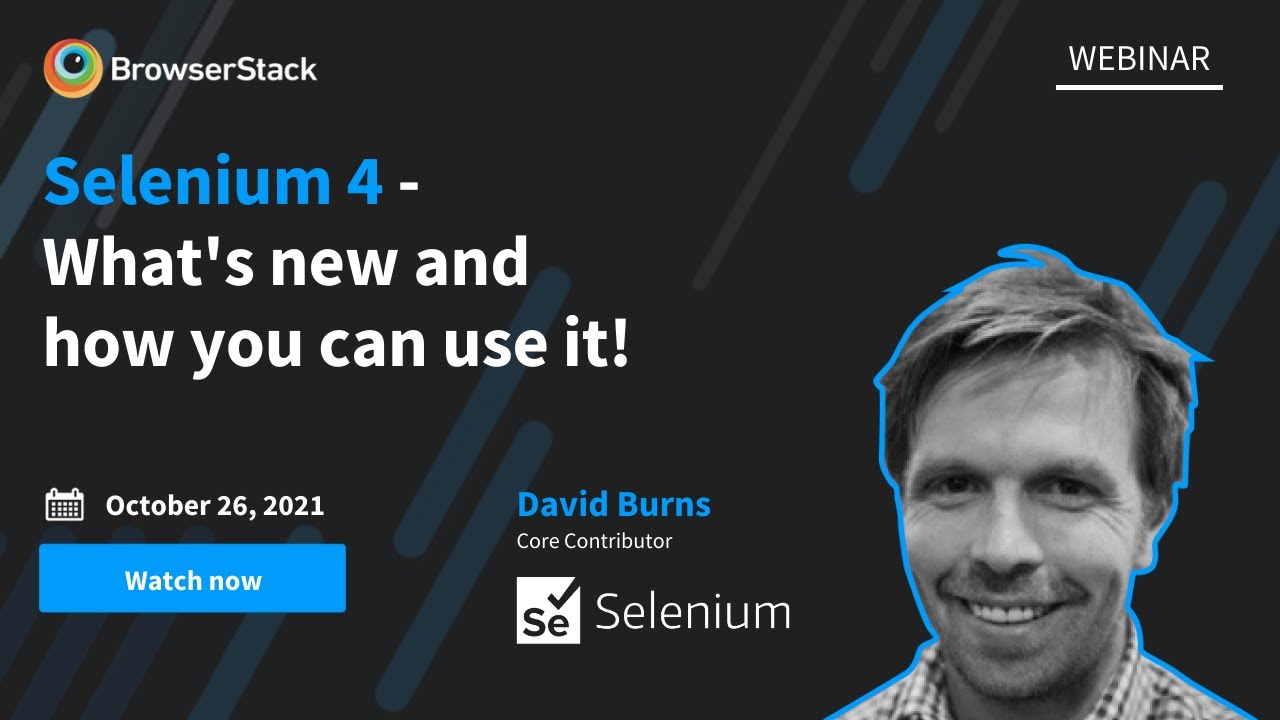 The earlier version of Selenium Grid was complex to set up and rigid in terms of scaling.

The new Selenium Grid comes with Docker support. This will enable developers or testers to spin up the containers rather than setting up heavy virtual machines. Moreover, it is redesigned in a way that will allow QAs to deploy the grid on Kubernetes for better scaling.

Managing Selenium Grid is now smooth and easy as there will no longer be any need to set up and start hubs and nodes separately.

Teams or individual testers can now deploy the grid in three modes:

Unlike in earlier versions, the Grid will now support IPv6 addresses and one can communicate with the Grid using the HTTPS protocol. In Grid 4, the configuration files used for spinning up the grid instances can be written in TOML (Tom’s Obvious, Minimal Language) which will make it easier for humans to understand.

The Grid in Selenium 4 also comes with an enhanced user-friendly GUI. Overall, the revamped Selenium Grid will enhance the DevOps process as it provides compatibility with tools like Azure, AWS, and more.

Most QA engineers using the Selenium tool suite are familiar with the popular record and playback tool – Selenium IDE. This Selenium IDE was earlier available just as a Firefox add-on. Later, it got deprecated with the introduction of the latest Firefox versions. This is because the add-ons in the latest Firefox (ver. 55) were standardized under the Web Extension mechanism.

With Selenium 4, the IDE is revived and now its add-on is available for major web-browsers like Firefox and Chrome. The add-on for Selenium IDE is now also available on the MS store.

The new Selenium 4 IDE provides some notable features like:

Selenium 4 brings an easy way of locating elements with the inclusion of relative locators. This means testers can now locate specific web elements using intuitive terms that are often used by users like:

The introduction of this new method in Selenium 4 helps locate web elements based on the visual location relative to other DOM elements. One can refer to this source to learn more about the implementation of relative locators in detail.

The documentation section has been revamped significantly with a neat UI for navigating to the desired section or page. This will help testers and developers find relevant information they need for a specific tool, language binding, etc.

The exhaustive documentation covers information about all tools and APIs under the Selenium umbrella. This will help individual testers (particularly the beginners) get acquainted with all the features and prerequisites to get started with automation testing.

Using this API will also help developers or QAs to test and resolve critical bugs for specific web-pages faster and on the fly.

There are several instances in test automation wherein one might need to open a particular link in a new tab or window to perform certain actions. To achieve this in Selenium 3, QAs had to create a new driver object and then perform the switch operation using the WindowHandle method to perform subsequent steps.

This is set to change in Selenium 4 as it comes with a new API – newWindow that allows users to create and switch to a new window/tab without creating a new WebDriver object.

Desired Capabilities were primarily used in the test scripts to define the test environment (browser name, version, operating system) for execution on the Selenium Grid.

In Selenium 4, capabilities objects are replaced with Options. This means testers now need to create an Options object, set test requirements, and pass the object to the Driver constructor.

Listed below are the Options objects to be used going forward for defining browser-specific capabilities:

8. Modifications in the Actions Class

In Selenium 4, several new methods have been added to the Actions class:

This method is added to Actions class to replace the moveToElement(onElement).click(). It is used to click on a certain web element.

This method will replace the moveToElement(onElement).clickAndHold(). It is used to click on an element without releasing the click.

This method will replace moveToElement(onElement).contextClick(). It will perform the right click operation.

This method is added to replace moveToElement(element).doubleClick(). It will perform a double click on an element.

This method (user for releasing the pressed mouse button) was initially a part of org.openqa.selenium.interactions.ButtonReleaseAction class. Now with the updated version of Selenium, it has been moved to Actions class.

Considering all the points above, one can conclude that the features in Selenium 4 appear quite promising in terms of making the test process easier. However, one must also bear in mind that, regardless of the Selenium version in use, the tests must be performed on real devices for accurate test results.

For that instance, teams can leverage BrowserStack’s Cloud Selenium Grid for running parallel tests across 2000+ real devices and browsers for testing at scale. It is compatible with Selenium 4 and enables QAs to run tests in real user conditions.

BrowserStack Automate offers complete support for Selenium 4, and its BiDi APIs. The following are a few of the Selenium 4 features Automate now supports out of the box:

Automate also supports other Selenium 4 features like Mocking Geolocation, Basic Auth, Device Mode simulation, and Network Simulation. Additionally, Selenium 4 is fully backward compatible with existing Selenium versions. That means you can migrate without compromising on the stability of your existing test cases.

How to upgrade from Selenium 3 to Selenium 4

What's new in Selenium 4? How can testers using Selenium 3 adapt to the new features and enhancement...

Learn 5 Selenium tips and tricks that will make it much easier for you to automate your tests.

Whether it is a website, a web app, or a mobile app, UI testing is essential to build & retain a...

How to upgrade from Selenium 3 to Selenium 4