How to create Selenium test cases

Selenium capitalized on the inadequacies of previously used frameworks like HP QTP, and Mercury’s Astra QuickTest which compelled users to write scripts in VBScript and were primarily intended for desktop-based tests. Its support of a variety of languages like Java, Python, C#, Perl, Ruby, .net and PHP, has made it popular with individual testers and companies like Netflix, Google, HubSpot, and Fitbit among others.

The core idea behind Jason Higgins launching Selenium back in 2004 was to remove the need for users to perform repetitive manual testing. This article will focus on how to write test cases in Selenium in a way that allows us to leverage its ability to provide maximum, accurate test coverage in a limited time.

Let’s start by giving a brief outline of how test cases are written, and then proceed to create a Selenium WebDriver test script from a manual test case using the JAVA programming language.

How to extract test cases from Business Requirements

All software must undergo End to End testing before being released. This method tests the application workflow from beginning to end by replicating different user scenarios. The first step in performing an End to End test is to analyze business requirements. A tester considers the different user personas involved, aims for maximum test coverage, and considers using automation to achieve it.

Once the test scenarios are framed, a set of industry-wide best practices are followed to frame these scenarios into a sequence of actions that can help verify a particular functionality. This is what is known as a Test Case.

Given that a user trying to gain entry to a Browserstack Account could either be a new or an existing user, test scenarios can be framed around both the Register and Login pages.

For the purposes of this article, consider the user persona to be that of a registered user.

All of these test scenarios can now be expanded into a set of positive and negative test cases.

Positive test cases ensure that the ‘happy-path’ or expected user journey when the correct data is entered, works as intended. Negative test cases focus on invalid actions, often by replicating the input of invalid data or seeking access to an invalid component.

In this case, the first test scenario can lead to the development of a positive test case, whereas the rest lead to negative test cases.

Starting out with Selenium testing? Try BrowserStack Test University and get access to real devices for a hands-on learning experience. Get Certified for Free.

Example of a Test Case in Selenium

Let’s build a Selenium test case example based on the first test scenario.

Read More: How to write Test Cases with Examples

Converting a Selenium Test Case to a Test Script

After configuring the system to execute test scripts (as discussed in a previous article on Selenium with Java), let’s convert the manual test case into an executable test script. For that, carry out the following steps:

Let’s explore each step in detail:

Step 1 – To launch the website in a browser of your choosing, set the system properties to the path of the required driver for the browser. Since this example uses Google Chrome, it should be set to the ChromeDriver. The code for the same is as follows –

Step 2 – Proceed to maximize the browser for a clear picture of test cases being executed using the following command.

Step 3 – Once the basic tasks are complete, execute each step of the manual test case articulated in the previous section.

Step 1 – The user navigates to Gmail.com

Step 2 – In the ’email’ field, the user enters their registered email address.

To perform this step, locate the email field on the Google Sign In form, and enter the requisite data. Use the ID locator in Chrome DevTools to identify the necessary elements for the Email field, and store them in a webelement variable.

Once the element has been located, perform the requisite action:

Repeat the same process for the password field as well

Once the email and password web elements have been located and the actions have been performed, the tester can perform the final desired action. In this case, the user clicks ‘Sign In.’

The assertion, in this case, is of the general form:

The String actual variable holds the post-login value, which is:

The method below can help get the expected URL:

Thus, the final code will look something like this:

If the test case passes, it will retrieve the same else will return as having failed.

The final code will be as follows:

How to Select Test Cases for Selenium Automation

Selenium and other test automation frameworks help reduce development cycle timeframes, avoid repetitive tasks and achieve 100% test coverage in a quick and efficient manner. But, to get the most out of Selenium tests, it is necessary to focus on some best practices when selecting test cases for automation.

Teams can leverage cloud-based platforms like BrowserStack that offer a Cloud Selenium Grid of 3000+ real browsers and devices. It empowers teams to run concurrent Selenium tests on desired real device-browser combinations online. Without the limitations of emulators and simulators, testers can verify website functionality in real user conditions. They can accelerate testing time with parallel testing, and get results faster without compromising on accuracy. 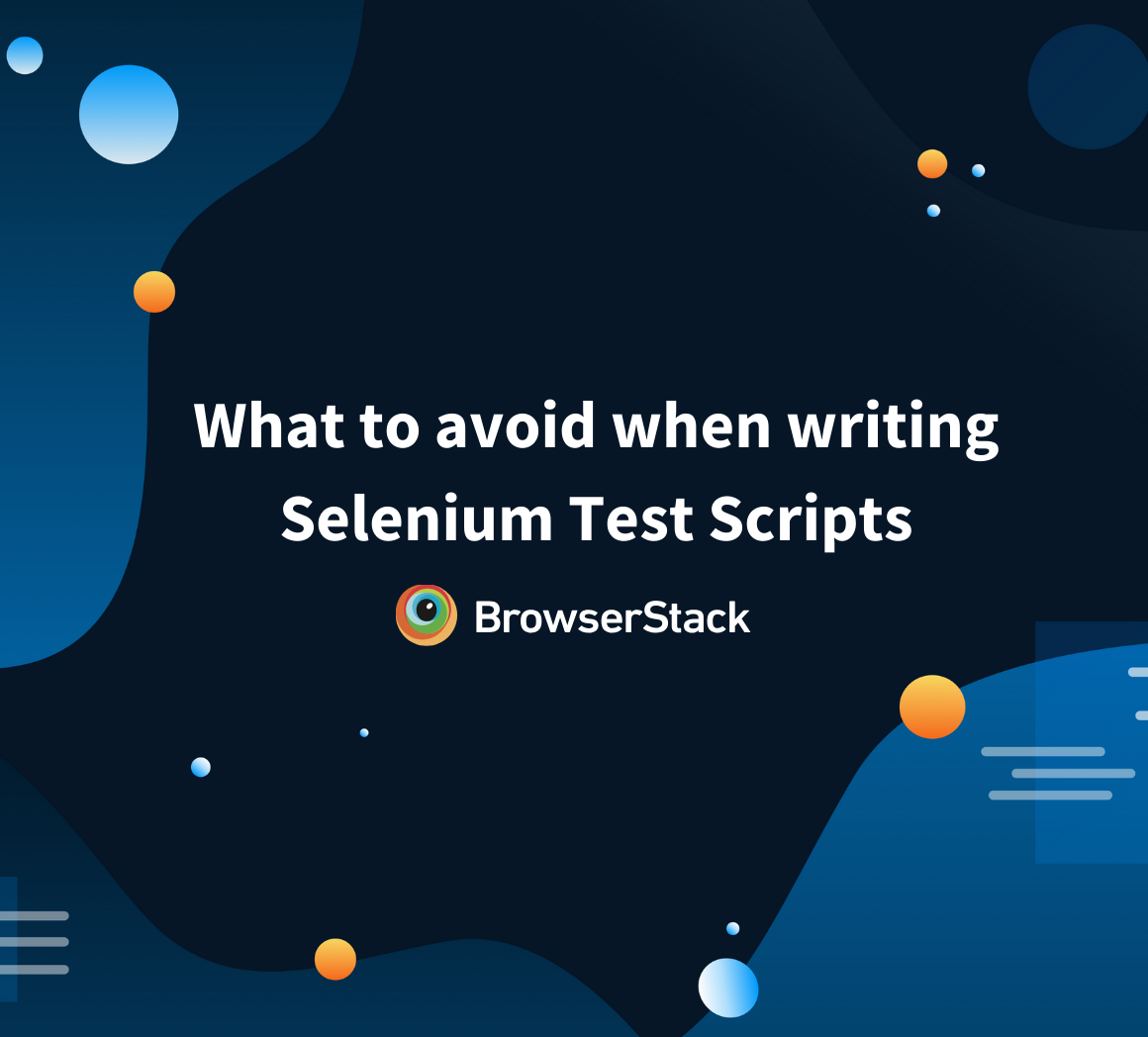 How to make your Selenium test cases run faster

Selenium tests too slow? Use these tricks to speed them up so that you get better results in much le... Myths about QA Testing you need to know

There's plenty of misconceptions floating around about QA testing. Know what's true and what isn't.

How to make your Selenium test cases run faster