This document guides you with the step by step process to execute Katalon Studio tests on Browserstack.

This guide will help you:

Follow the below steps to set the capabilities and execute test script on BrowserStack:

This section will guide you through enabling Local Testing, and then using it to test websites on your work machines, CI/CD machines/nodes, and other private network configurations.

Enabling Local Testing with Automate is a simple two-step process:

You can start a Local Testing connection through your command-line interface by following the steps below:

Now, run the test script using the Remote option as shown in the following figure: 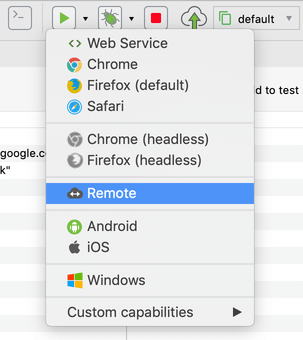 If the test runs successfully on BrowserStack, the Log Viewer tab in Katalon Studio displays the test results as shown in the following figure.

You can also verify the test script status on the BrowserStack Automate dashboard.

On BrowserStack, you can run multiple test scripts at the same time across various browser, device and OS combinations, this is Parallel Testing. Parallel Testing gives you the same benefits as running a multi-threaded application.

Parallel testing in Katalon Studio is done with the help of Test Suite Collection, which includes Test Suites, and in return, these Test Suites include the Test Cases.

Following are the steps to execute test scripts parallelly on BrowserStack:

You can also incorporate the following capabilities to configure your test scripts:

The Katalon Studio test scripts are executed on BrowserStack with most of the browser and OS combinations, however, there are few exceptions at present: OS X Mavericks and OS X Catalina.

You should now be able to execute Katalon Studio tests on BrowserStack, if you need any further help, feel free to contact our Support team who are always ready to help you out!

Did this page help you?

Contact our Support team for immediate help while we work on improving our docs.

We're continuously improving our docs. We'd love to know what you liked

Thank you for your valuable feedback

Select a language or framework of your choice

Don’t see the language or framework you use? You can still run your tests. Contact Support for help.

Select a language or framework of your choice

Don’t see the language or framework you use? You can still run your tests. Contact Support for help.